Coronary artery bypass surgery, also coronary artery bypass graft (CABG pronounced cabbage) surgery, and colloquially heart bypass or bypass surgery is a surgical procedure performed to relieve angina and suppose to reduce the risk of death from coronary artery disease. Arteries or veins from elsewhere in the patient's body are grafted to the coronary arteries to bypass atherosclerotic narrowings and improve the blood supply to the coronary circulation supplying the myocardium (heart muscle). This surgery is usually performed with the heart stopped, necessitating the usage of cardiopulmonary bypass; techniques are available to perform CABG on a beating heart, so-called "off-pump" surgery.

What Good it does?

Bypass, no matter how carefully done, do exactly the opposite of what heart specialists and pathologists are theorizing and preaching. Their contention has been that micro-trauma suffered by coronary arteries, are at the heart of the whole problem of athromatous plaques that cause CAD and other forms of arterial disease. The damage that invasive diagnosis and treatment cause is many times larger than occurs on its own.

Invasive therapy is well intentioned hope of doing good by doing evil. Such an approach widely employed against cancer has failed to bear any fruit so far. All these aggressive interventions, in CAD or Cancer, are good as palliatives but thoroughly useless as curative measures.

"Each year doctors perform 400,000 bypass surgeries and 1 million angioplasties, where mesh tubes are placed in diseased arteries to hold them open. While most people believe that such surgery is life-saving, the available 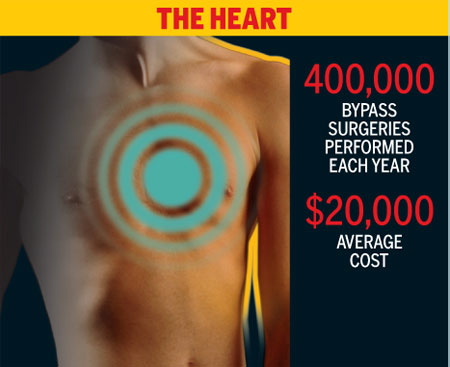 data say otherwise. Except for about 3% of people with severe heart disease, treatment with drugs alone works just as well to extend life and prevent heart attacks as surgery does. "Cardiologists like to open up arteries," says Dr. David D. Waters, chief of cardiology at San Francisco General Hospital. "But there is no evidence that opening up chronically narrowed arteries reduces the risk of heart attack." Harvard Medical School's Dr. Roger J. Laham figures that at least 400,000 angioplasties a year are unnecessary. "I'm sure we are way overtreating our patients," he says. Surgery carries big risks, such as mental declines after bypass operations. The overuse is exacting a big toll on individual patients and the health-care system, argue such experts as Dr. Nortin M. Hadler, professor of medicine at the University of North Carolina at Chapel Hill"  [Source: Business Week May 2006 (USA)]

World over, New York or Nagpur, Barcelona or Bombay, garbage is never removed, but merely relocated. Hence any invasive procedure on any artery of the body by catheter of angiography or angioplasty or by the manipulations of bypass surgery uproots the arterial plaques to send them straight to the brain.

An American study has shown that during angioplasty / Bypass, the brain receives this garbage from the coronaries in 100% of cases. The damage to the brain is clearly manifest in over 50% of cases. The moral is simple, while the world is still debating whether angioplasty and bypass are really helpful; both procedures certainly harm the brain. The heart fails to gain, the brain stands to lose.

Then How and Why does By-pass work?

The Harrison Principle's of Internal Medicine, the tome for all medical students world over explains it candidly in following terms:

A composite verbatim quote from its latest edition is appropriate: 'Angina is abolished or greatly reduced in approximately 90 per cent of patients following coronary revascularization. Although this is usually associated with graft patency and restoration of blood flow, the pain may also have been alleviated as a result of infarction of the ischemic segment or placebo effect … CABG does not appear to reduce the incidence of myocardial infarction in patients with chronic IHD; perioperative (i.e. in the immediate post-operative period) infarction occurs in 5 to 10 per cent of cases but in most instances these infarcts are small'. If bypass cures pain by killing the heart, angioplasty (Click Here to Read) can behave no differently.