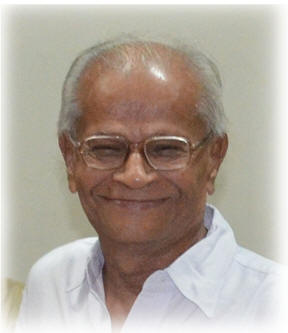 With immense giref and sense of void we announce the demise of Dr. Manu Liladhar Kothari (MLK) on 16/10/2014. This website has been developed based on the works and thoughts of MLK and Dr. Lopa A Mehta (LAM).  MLK  the emiritus professor of G S Seth Medical College and KEM Hospital of Mumbai (India) was associated till his last day with the institution, for past six decades. Our close association with this exceptional personality every moment made us realize that his constant endevor was to see that his patients do not suffer.

It was wayback in December 1955, having just passed his first year bachelor of medicine-bachelor of surgery exams (MBBS), he was perusing Hamilton Bailey's Physical Signs in Surgery. He was yet to enter the hospital wards and start seeing patients. Seeing the pictures in the book, two thoughts occurred to him. He wrote, "In inflammations of hip, the fixed adduction deformity can be measured visually without having to move the patient's painful limb as the text advised. All that involved was to measure visually the angle between lines joining anterior superior iliac spine and the deformed position with a line drawn bang horizontally from the spine on the normal side." He says, "Inguinal hernia in the male and the female can be differentiated from the femoral hernia by inspecting the inguino-scrotal or inguino-labial curve. This curve loses its concavity in inguinal hernia but does not do so in femoral hernia" . He wrote this to Hamilton Bailey and was rewarded, in 1959, when, in the 13th edition of Demonstrations of Physical Signs in Surgery, a method was described, named after him and with a footnote on his biographical data.w12 Kothari's findings are an excellent example of how simple and logical observations, in a field of clinical medicine unexplored to him, made discoveries that were not obvious to trained surgeons for many years.

After having qualified as a surgeon with flying  colours, he opted for a post of a teacher in anatomy in his Alma Mater, for anatomy was for him, akin to the science of Atma. "His numerous students spread all over the globe will always remember that anatomy is not just a study of the structure of the human body, but a study of a work of Art of nature" [Obituary The Economic Political Weekly 8/11/2014].This page of our website is compilation of all his work probably unprecedented in the history of Indian Medicine. The tables below either provides the details of his publications and from where to obtain or the papers which can be downloadable. All the books / publications mentioned are co-authored with Dr. Lopa A Mehta, for the papers there had been other co-authors. We express our indebtedness and gratitude to Ms Ashish Arts and Bhalani Medical who made selfless contribution to the digitization of the journal papers and the voluminous Nature of Cancer despite their professional commitments.


Phenomenon of Death and Medicine

Other Recently Published Books
(For the above ten books you may also log into www.amazon.in and purchase them on-line)

Downloadable Papers from Various Journals
[Page is under update]